As the season begins to draw to a close, we keep rolling out the Spotty Profiles for your enjoyment. This week we are privileged to have none other than the Chairman of Selectors for 2018/19, John Ross. When it comes time to make tough decisions, John is the man many would want. Possessing superior cricketing smarts and a level head (some may argue otherwise!)

A stalwart of Spotswood, John has been a vital part at Spotty – both on the field as a fierce and often intimidating opening bowler, but also off the field with many hours of volunteering and coaching that many are grateful for.

Favourite Thing about Spotty?      The people. Never amazes me the amount of thankless hours (Committee and other helpers) that go into running a club like Spotty.

What are you looking forward to the most next season?      To see the continued improvement of the juniors now playing senior cricket. As well seeing more new juniors playing this great game.

Why did you choose your particular role at the Club?     I wanted to give something back to the club, while still remaining around the place. A wise man always told me “the game owes you nothing, you owe the game”

If you could have dinner with any 3 guests (dead or alive) who would they be?      Shane Warne and Tiger Woods (imagine the stories between these 2), and Mike Tyson.

Best Coach? And Why?      Graeme Dean. When he came to Spotty, he extended my years of playing, by convincing me to reduce my run up. Convincing me to do that was no mean feat.

Greatest Cricketing Moment You’ve Witnessed?     It has to be Steve Waugh’s last Boxing day test match innings. I was there with my 12 year old nephew. Steve took a bad blow to his elbow, but continued to bat on, but obviously in extreme pain. About 5 overs later, he retired hurt, at which time my nephew looked at me disappointingly and said “will he come back, or is he done”? I replied, “It’s Steve Waugh buddy, of course he will be back”. Following another 2 wickets falling (about 2 hours), out he strode to a standing applause. #WARRIORANDLEGEND

Your Most Treasured Sporting Moment? (In which you’ve been involved).     Definitely my one and only first eleven premiership in 05/06. Previously, I had played in about 5 losing semi finals, as well as 6 losing grand finals. The feeling of winning that GF was fantastic, especially for the joy it brought to Jack Lauder (RIP), Roy and all of the other members and helpers around the club.

This week we profile club stalwart John Wheeler, somebody that has poured blood, sweat and tears into the Club and has been influential in developing the Spotswood Cricket Club that we know and love.

John has been involved at the club in many facets as Player, Coach and President to name a few. John’s dedication to his role at the club over the years has been remarkable and continues to this day.

From his days as a player, to taking the Presidency and  becoming coach of the junior sides at Spotty. John has done it all and continues to remain actively involved in the club!

Read on to found out more on John and his involvement at Spotswood CC!

What do you see your role at the Club to be? Cricket operations, cleaner, covers man whatever needs to be done really

What are you looking forward to the most this season? Having a full senior side and playing our best cricket. It all flows on from there

Best Teammate you’ve played with? And Why?  Peter Daffey, good to have on our side. Fast Bowler who was nuts but a great player, probably the most intimidating player I have played with. He was feared by many with his left arm quicks

Your Most Treasured Sporting Moment?    2007 at MCG when Cats won first premiership for 44 years. Being at the game with son Travis, nephew Luke Salmond and Brother in law Fred after many pain staking years as a losing GF’s

Win the toss and? Always bat

Favourite Thing about Spotty? The people, always about the people

This week we profile the right hand man of the Spotswood Cricket Club, Vice President, Simon Barnes. Simon played in the infamous “Veterans” side for numerous years and this year (with his playing days over) has stepped up to take on the role of Vice President. Simon’s role is one many people tend to shy away from yet we are so privileged to have someone of Simon’s calibre step up! The connection and mateship between Simon and President, Peter Young, is something to be envied and will keep the Club in a great position for years to come!

Read on as we find out more about Simon including his views on his role, who he would invite to dinner, his most treasured sporting moment and MORE!

Why did you choose your role at the Club?  It actually chose me! And I’m more than happy to do what I can to help us achieve our goals for the season – on or off field.

Your Most Treasured Sporting Moment? (In which you’ve been involved).  Every time I played cricket in the same team as my sons Tom and Charlie.  Winning the flag with both of them last season was a bonus!

Win the toss and?  Bowl (it’s not a batsmen’s game like they’d have you believe).

If you could have dinner with any 3 guests (dead or alive) who would they be?   Michael Palin, Johnny Cash and Bon Scott

Favourite Cricketer to Watch?  So many to choose from, but I can’t go past Shane Warne as a leg-spinning genius – a true master of his craft.

Craig Butterfield is a long time player and club favourite of the Spotswood Cricket Club who will be captaining the 2nd XI this season. Craig played all his junior cricket at Spotty starting in 2002/03.  After cracking the 1st XI, Craig decided to take his cricket a step further and join Premier side  Melbourne Unversity Cricket Club at the start of the 2012/13 Season. Unfortunately, for Craig he had an unlucky run with injury and subsequently returned to Spotty in 2014/15. 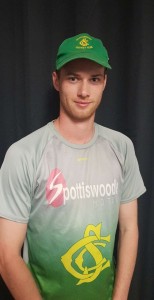 Punter’s 2003 world cup final innings where he made 140*. I have watched the replays countless times since then and watching how cleanly he hit the ball especially in the last 10 was amazing.

Win the toss and?

Your Most Treasured Sporting Moment? (In which you’ve been involved).

If you could have dinner with any 3 guests (dead or alive) who would they be?

What do you see your role at the Club to be?

Developing and preparing players to be 1st XI cricketers. It’s a big step up from 2’s to 1’s but I believe anyone playing in the 2’s should be looking to play 1’s. I want to help these players understand what is required for them and support them as they make the transition from 2nd XI cricketer to 1st XI.

Best Coach? And Why?

Dan (The Don) Schuppan, he keeps things simple and has a good understanding of the game and wants to see every player at the club improve. More importantly though he gave the thumbs up for me to captain the 2’s.

What are you looking forward to the most this season?

Captaining the 2nd XI for the season, I’m really confident we are going to have a successful year. 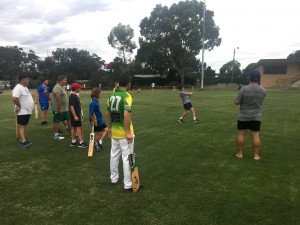 A couple of young guns improving their skills

As spring starts to come to life, summer is on the way and what a great time to come along and join in junior pre-season training for the 2018/19 season.

There are vacancies for U15 (boys) and U13 and U11 (mixed). Junior cricket is a great way to get involved with the local community, make new friends and some long-lasting memories.

There are two sessions currently scheduled: